Our staff is antibodied-up and we are excited to resume seeing clients in person again! Effective May 1, and conditional upon no increase in the Covid-19 positivity rate in Virginia Beach, Birdneck Animal Hospital will resume seeing clients in person in our hospital. Please call our office for further details on how we are resuming in person visits while continuing to follow CDC safety protocols. Our doors will remain locked and masks and social distancing will still be required. Only one scheduled appointment will be permitted in the building at a time. We will still happily provide curbside service for those clients who wish to not enter the hospital building. 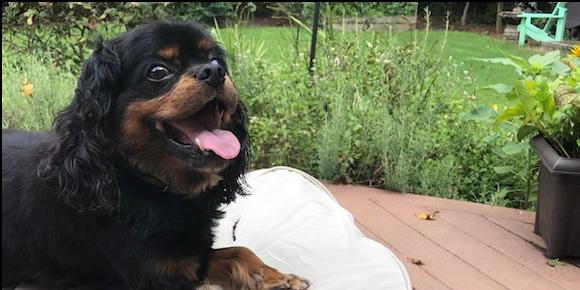 Perhaps the old saying "he aged like fine wine" has become a little overused, but in the case of JoJo, who, during his first night at our house on December 23, 2011, spilled a glass of wine on a couch, there is perhaps not a better description.  Those who know the spaniel well can attest that nowadays, he has gained the wisdom, austerity, and the tendency to snore of an older dog without sacrificing a puppy's vivacity and love of incessant licking.  And for a lap-dog, JoJo has demonstrated an almost absurd passion going on walks, to which our golden retriever seemingly cannot relate.  In fact, the mere act of putting on your shoes might cause him to bark with fervor, begging you to let him pull you like a fifteen-pound sled dog down the street.  It's hard to believe that same furry ball of idiosyncrasy has been warming our laps for over ten years now, but JoJo is much more than just an adorable companion; in fact, he has yet to cease his noble service as an ever-vigilant sentinel, protecting our home from dogs, horses, lions, tigers, and bears who would dare to appear on our television.- Ford Family