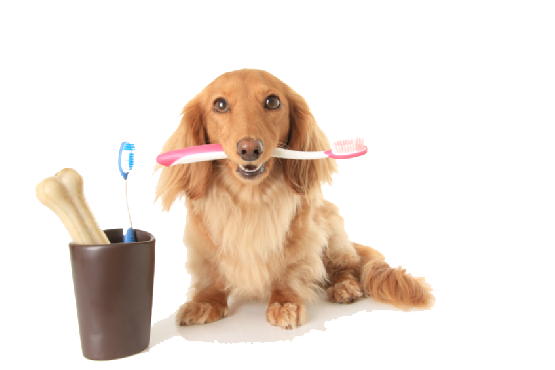 Eighty percent of dogs and cats show oral disease by age 3, and it is one of the most common health problems treated in any small animal hospital today. The build-up of bacteria in your pet’s mouth may cause more than just bad breath. Bacteria in the mouth are also the cause of oral disease and diseases in other organs like the heart, liver and kidneys.

Just like humans, pet’s teeth are prone to plaque build-up, and when allowed to combine with saliva and residual food between the tooth and gum, plaque turns to tartar. If plaque and tartar are not removed routinely by your veterinarian, they may cause periodontal disease. It’s important to understand the differences between plaque, tartar and periodontal disease and how to prevent them.

Dental plaque is a sticky substance that covers the teeth. It consists of bacteria, saliva, food particles and epithelial cells. Plaque builds up on the tooth surface and gum line every day. Left undisturbed the plaque can mineralize, or harden, in less than two days, forming calculus or tartar. Plaque can get worse where teeth are closer together, which will result in bad breath.

Dental tartar is a film that covers teeth consisting of calcium phosphate and carbonate, food particles and other organic matter. The tartar will stick to the tooth surface forming a scaffold for more plaque accumulation. The continued build-up of tartar both above and below the gum line can eventually produce an environment that is a haven for bacteria that may be more destructive to the periodontal tissues and also produce a more noticeable odor. This can lead to periodontal disease.

Gingivitis in cats and dogs is an inflammation of the gums most commonly caused by the accumulation of food particles in the crevices between the gums and teeth. The main symptom is bleeding, although you may also notice redness, pain and difficulty in chewing. If gingivitis is not treated, it may lead to periodontal disease.

Periodontal disease in pets is a very common infectious disease caused by bacteria that make up plaque. This causes the destruction of the structures that support teeth and left untreated, eventually leads to tooth loss. Symptoms of periodontal disease include bad breath and red or inflamed gums. There are other signs of dental disease in your pet that may be more subtle. Pets may preferentially choose softer foods; play with chew toys less and decline crunchy treats. They may chew less in general, and this sometimes causes the pet to vomit, seen as undigested or poorly chewed food. Increased salivation and pawing at or rubbing the face can be other indications of oral pain.

Our animal clinic provides extensive cleaning of your pet's mouth including scaling that incorporates special tools to remove plaque. The specially trained staff also add fluoride treatments to improve health and reduce sensitivity. Our veterinary clinic also commonly applies tools that polish the teeth to remove scratches from the tooth enamel. If extra oral medicine is needed for a pet, the professionals at our veterinary clinic may also apply these and advise owners to use them at home.